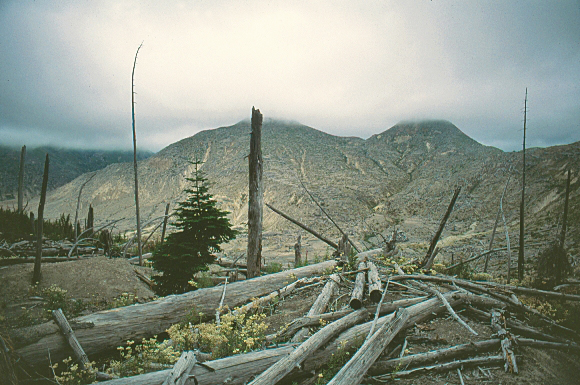 One day, about ten years ago, I stood amidst a scene of complete forest devastation. All around me, as far as I could see, was a ruined ecosystem. Tens of thousands of tree trunks from a once-vast and vibrant forest lay flattened and lifeless in a landscape of ash. No bird songs enlivened the eerie silence of the windswept, wounded land, and there was no sign of any wildlife amongst the desolation.

I had come across numerous scenes of forest destruction before, during travels to the tropical rainforests and to logging sites in places such as the west coast of Vancouver Island in Canada. Distressing though those were, they didn’t compare with the scale and overwhelming totality of forest loss I saw that day. I felt tiny and ineffective in the face of the immense destruction which had been wrought upon a healthy and robust ecosystem. My life, and the aspirations I have for my work, seemed to pale into insignificance as I stood there.

However, over the course of the next few hours, other feelings began to surface in me, replacing those initial ones of pain and shock. As I walked amidst the shattered tree trunks and broken stumps, I noticed some young seedling trees growing out of the ashes, and in a few areas herbaceous plants were abundant. Then, towards the end of my time there, I spotted a chipmunk scurrying across the ground, and my spirits lifted at the sight of this seeming miracle. My heart soared as I realised that the huge panorama of ruination contained the small signs of returning life, of hope for a future forest.

When I visited Mount St. Helens in Washington state in the western USA that day in 1993, it was 13 years after the eruption which devastated 600 square kilometres of the surrounding forest. I was looking for inspiration from the spontaneous ecological restoration of the forest which was taking place there, both for my own project – the restoration of the Caledonian Forest in the Highlands of Scotland – and for my faith in the future; faith that natural forests will continue to flourish and thrive on our increasingly human-dominated and biologically-depleted planet.

For me, hope is one of the most important qualities which is needed in our world today, and one which I seek to embody through my work. Ecological restoration, as the human-assisted recovery of degraded ecosystems, is in essence a work of hope. It is an expression of hope that our culture will change its present destructive relationship with the rest of Nature, and replace it with a more enlightened one, based on a recognition of the importance of all species and ecosystems for the well-being and evolutionary potential of the planet.

Sometimes, however, it’s hard to stay connected with the quality of hope. That is why the affirmation I gained from my visit to Mount St. Helens was so important. When I first became aware of the extent of deforestation in Scotland, I thought that the country represented perhaps a ‘worst case scenario’ in having just 1% of its original forests left. However, since then I’ve found that many other forest ecosystems, from the kauri forests of New Zealand and the dry tropical forests of Mexico and Central America to the famous cedars of Lebanon and the redwoods of California, have experienced comparable levels of near-total forest loss. If present trends continue, the remaining large relatively undisturbed natural forest areas of the world – New Guinea, Siberia, the Congo basin, the Amazon – will, inevitably, be added to this list. In the face of such all-pervasive forest destruction, where then is the hope, and what future is there for natural forests in our world?

In my experience, hope, like love, is a magnetic quality – the more I focus on it, and translate it into practical reality, through such a simple act as planting a tree, the stronger it becomes inside myself. Perhaps more importantly, I also encounter more hope in the world around me, as I meet other people with a positive, hopeful outlook for the future. I’ve learned that the practical step of anchoring more hope in the very fabric of the Earth – by, for example, planting a tree – literally brings more hope to the planet, which I can then experience in my life. Thus, like a tree itself, hope grows with each positive action by any person, although, as with a tree’s roots, much of this growth is not immediately apparent to the casual observer.

However, just as at Mount St. Helens, where there were small signs of life amongst the devastation, so too, amidst the wanton and seemingly unstoppable forest destruction of our times, there are signs of hope, if I, or anyone, looks for them. Some of these signs are the numerous forest restoration projects which have been initiated all over the world in recent years. From the mangroves of Viet Nam and the Atlantic Forest of Brazil to the oak forests of Russia, concerned local people are taking action to restore their indigenous forest heritage. These projects are now gaining in experience and strength, and are beginning to link up with each other. In doing so, they form an important strand in the web of hope for the future of forests.

What other strands are there? What elements are needed to create a truly viable future for natural forests, and all their constituent species? Foremost amongst these is protection for the remaining untouched forests of the world – we need to safeguard as much of the surviving old growth forests as possible. This has already been accomplished in New Zealand, where the logging of all native forests on public lands was stopped in 2002, and there is growing pressure for a similar step in the USA. Thailand and Cambodia have set positive examples by banning logging in their rainforests (although the effectiveness of this is being undermined by illegal logging in both countries). The work of Conservation International to protect the most important ‘hotspots’ for biological diversity on the planet is also achieving positive results, with new national parks established in areas such as the Bolivian Amazon and the south of Madagascar.

Real protection for the world’s remaining primary forests will only be achieved, however, if we also substantially reduce our demands for timber and paper, so this must be another key element in any strategy. Viable alternatives to the use of wood pulp for making paper already exist, with straw, sugar cane waste and hemp being just three examples. Combining these with a substantial increase in the use of recycled paper and a reduction in global paper consumption will enable the use of trees for paper to be completely eliminated. Targets should be set for this now, with a phased reduction scheduled to take place over a number of years.

In a similar fashion, wood consumption must be drastically reduced, with good quality timber being restricted to high grade products with substantial longevity, such as furniture, instead of being wasted on single use commodities like disposable chopsticks. Wood needs to be regarded as a precious and valuable material again, treated with respect and reverence for the trees whose life-work it represents.

The way in which timber is produced must also change dramatically. A cessation of logging in primary forests will shift the burden of productivity on to secondary forests and plantations, but their management and structure will have to be very different from the majority of practices today. Plantations should be composed primarily of native tree species, and more benign alternatives to clearfelling must become the norm.

The current trend towards certification of commercial forestry plantations as being ‘sustainable’ is better than no regulation of the timber industry at all, but those efforts are not leading to the maintenance of ecologically sustainable forests. At best they will merely extend the period of ‘sustainable’ logging operations. Truly sustainable forests will only result from replicating the natural ecological processes within primary forests. This was highlighted by a study of the Kibale Forest in Uganda over 23 years, which concluded that sustainable logging there would involve the harvesting of one large tree per hectare per century, with extraction done by hand to minimise disruption to the forest. When this is compared with the logging operations which are being certified as ‘sustainable’ by schemes such as that operated by the Forest Stewardship Council, it immediately becomes apparent how far those are from true ecologically-based sustainability.

Combining these elements with a massive, locally-based, international programme of native forest restoration, it is possible to envision a future in which natural forests expand once again. Only by achieving this will there be adequate habitat for all the world’s forest-dependent species and a continuity of the ecosystem services which are vital for the well-being of the planet and human culture.

This may all seem far-fetched and utterly impractical, given the reality of our current world situation and the unquestioning adherence of every government to the principle of unlimited economic growth. In practice, it’s inevitable that further, and accelerated, forest destruction will take place before conservation and restoration become our primary relationship with forests, rather than exploitation. However, it’s imperative that we articulate such a positive vision now, and take the first steps to making it a reality.

There is one further factor which gives me hope for the future – the irrepressible life force of Nature. That was perhaps the most important thing I observed that day at Mount St. Helens. I’ve also experienced it directly in Scotland, when I’ve found naturally-regenerating Scots pine seedlings, kilometres from any possible seed source, in areas where we are seeking to restore the Caledonian Forest. The forests will come back, as soon as circumstances (and people) allow a few seedlings to gain a root-hold. The wounds on the Earth will heal, and if we actively assist in this, we can accelerate the restoration process. From the pain of environmental destruction today, a rebirth as miraculous as the sight of that chipmunk at Mount St. Helens can and will occur. Another expression of this is the growing number of supposedly ‘extinct’ species which are being rediscovered, sometimes more than a century after they were last seen.

The power of hope and love to nurture the life force of Nature forms an important theme of a novel entitled ‘Beauty’ by the American writer, Sheri Tepper. The book incorporates children’s stories such as ‘Sleeping Beauty’ and draws a parallel between the princess’s sleep for a hundred years with the disappearance of beauty in our world today, through the destruction of Nature. In her liner notes for the book, Ms. Tepper writes that perhaps beauty is just sleeping in our world, awaiting the right time, and the presence of love, to awaken and re-emerge again. This resonates deeply in my heart, and affirms that there is indeed a future for forests in our world – it’s just up to all of us alive now to help bring that about.

Return to the Writing page.

While the headline uses the word 'populations' to describe fish, the article itself still uses the word 'stocks', which implies that fish are just a commodity for humans to exploit. Fish are free-living wild animals, not some stock item in a supermarket.
https://www.theguardian.com/environment/2021/jan/22/only-a-third-of-uks-key-fish-populations-are-not-overfished

Maybe this can be a first step in finally acknowledging the wisdom & rights of native peoples, in the USA & other countries. "It aligns Indigenous environmental knowledge with presidential priorities that benefit everyone,” said Faith Spotted Eagle.
https://www.theguardian.com/us-news/2021/jan/21/dakota-access-pipeline-joe-biden-indigenous-environment

Great to see that this project is being led by farmers. https://www.theguardian.com/environment/2021/jan/22/farmers-back-plan-to-reintroduce-white-tailed-eagle-to-norfolk