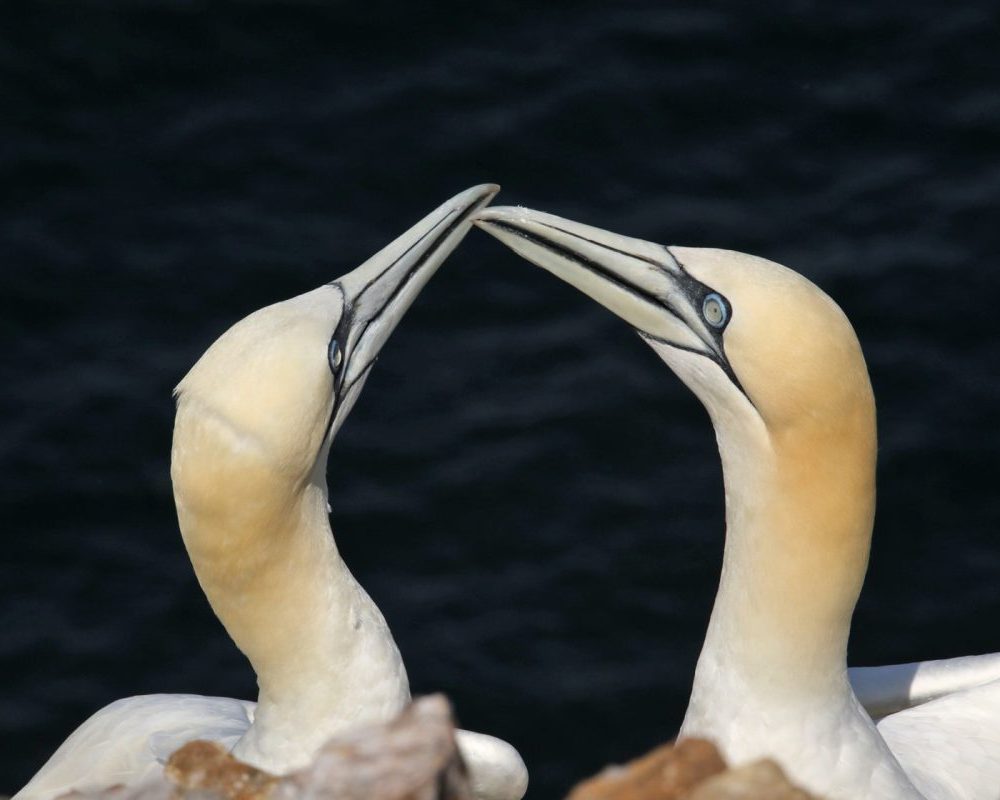 When I visited the RSPB’s Troup Head Reserve in the middle of July in 2021, I was so impressed by the spectacle of mainland Scotland’s largest colony of gannets (Morus bassanus) that I returned for another visit with my wife a couple of weeks later, on 1st August. In the course of those two trips I was able to see and document a lot of the behaviour of the birds, as well as observing some of the other species that nest on the cliffs there, resulting in this blog extending to a second part.

At the time of my visits most of the adult gannets were paired up, and many of them had a chick visible in their nest already. The birds that were more readily accessible – those that were on the edges of the colony – didn’t appear to have any eggs or chicks, so they may not have been quite of breeding age yet. However, there was still plenty of pair bonding behaviour going on between those birds (perhaps in readiness for mating in the next year?).

“I was very touched by how the birds interacted with their mates, whether it be by ‘fencing’ with their bills or preening the neck of their partner. Intimacy and affection are recognised as important human qualities, and are vital in developing and maintaining personal relationships between people. It was obvious from watching the gannets that the same is true for them, and it was very obvious that there was a genuine feeling of care and connection between each bird and its partner.

In a dense colony such as this at Troup Head, it’s not all love and affection however. I saw various instances of squabbling between neighbouring birds, usually where one of a pair took exception to the proximity of another bird. It was not clear whether the squabbling was due to an infringement of a pair’s nesting territory, or a case of the female of a pair, for example, not tolerating a nearby single bird that could be a rival.

In some instances, the outcomes of this squabbling were very clear, with one bird being forced to fly away by another.

In addition to the breeding gannets, there were considerable numbers of immature birds in the colony as well. These are birds that have not yet reached the age of breeding and are distinguished by having mottled plumage, with darker feathers still prominent on their bodies and wings. Juvenile birds are a dark or slate grey colour when they leave their nest, and over the following 3 or 4 years their plumage becomes more and more white in overall colour (apart from the neck and wingtips), until they reach the full adult coloration and are ready to breed at 5 years old.

These immature birds seemed to be fully grown in terms of their size, and were distributed in amongst the breeding birds in many cases, no doubt learning from observation how to mate and rear a chick for themselves in future years. In flight, they seemed just as proficient as the fully adult birds, and were able to negotiate the strong winds, often using those to hover in one spot for several seconds or longer.

Although the gannets are the most visible and obvious birds at Troup Head, there are a number of other species that nest on the cliffs there as well. These include kittiwakes (Rissa tridactyla), guillemots (Uria aalge), razorbills (Alca torda), fulmars (Fulmarus glacialis) and even a few puffins (Fratercula arctica). Perhaps because of their larger size and greater numbers, the gannets seem to occupy many of the best nesting sites, with the other species having to rely on less favourable locations.

There were discrete areas where the guillemots and kittiwakes were nesting, with the former in particular occurring in dense concentrations on parts of the cliffs. I saw far fewer razorbills overall, and only got a few brief glimpses of puffins when I saw some birds in flight. The different species seemed to be quite content and self-contained with where they were, as I didn’t see any instances of inter-species aggression at all.

It was the gannets though that drew most of my attention, as well as my main photographic interest. I was constantly delighted to be able to document them in different behaviours or bodily positions, not only when they were perched or sitting on the cliffs but also when they were airborne. There were seemingly endless opportunities to get some good images of what in my view is a very photogenic species.

Gannets are well-known for their spectacular feeding technique, which involves diving, torpedo-like, with their wings retracted into a streamlined shape, from a height of 30 metres above the sea. They have special adaptations, including a sponge-like section of bone at the base of their bills, to enable them to withstand hitting the water surface at 100 kilometres an hour.

This feeding method enables them to catch fish at deeper depths than many other birds, although as this usually takes place out at sea it wasn’t possible to see it from the cliffs at Troup Head. It apparently leads to occasional collisions between diving birds and others that are in the water already. In flight, however, I was impressed with how so many birds were able to be airborne in close proximity to each other without coming into direct contact, despite the strong winds they were having to negotiate.

At the end of my second full day of observing and photographing the gannets at Troup Head, I felt very privileged to have been in such proximity to, and close company with, these beautiful and remarkable birds. It was a source of great joy for me to see so many aspects of their lives and behaviour, ranging from the mundane to the intimate.

I came away from the experience with a strong sense of exhilaration, and of the freedom of flight and the air that the gannets enjoy. Such deep and meaningful encounters with wild nature were the original birthright of all humans, but sadly in our world today many people never have the opportunity to experience them. I hope this blog will inspire people to visit not only sites such as Troup head, but also other locations where natural ecosystems still exist, with their full complement of native species.

To finish, here’s a brief compilation of some video footage that I shot during my two visits to Troup Head. Because of the strong winds on both days, it was very difficult to do much filming – it was a real challenge to keep the camera stable and immobile in most places. There were just a few spots with enough shelter from the wind to do some filming, and although I wasn’t able to document all the gannets’ behaviour I did manage to record a pair mating (near the end of the video).

This site uses Akismet to reduce spam. Learn how your comment data is processed.