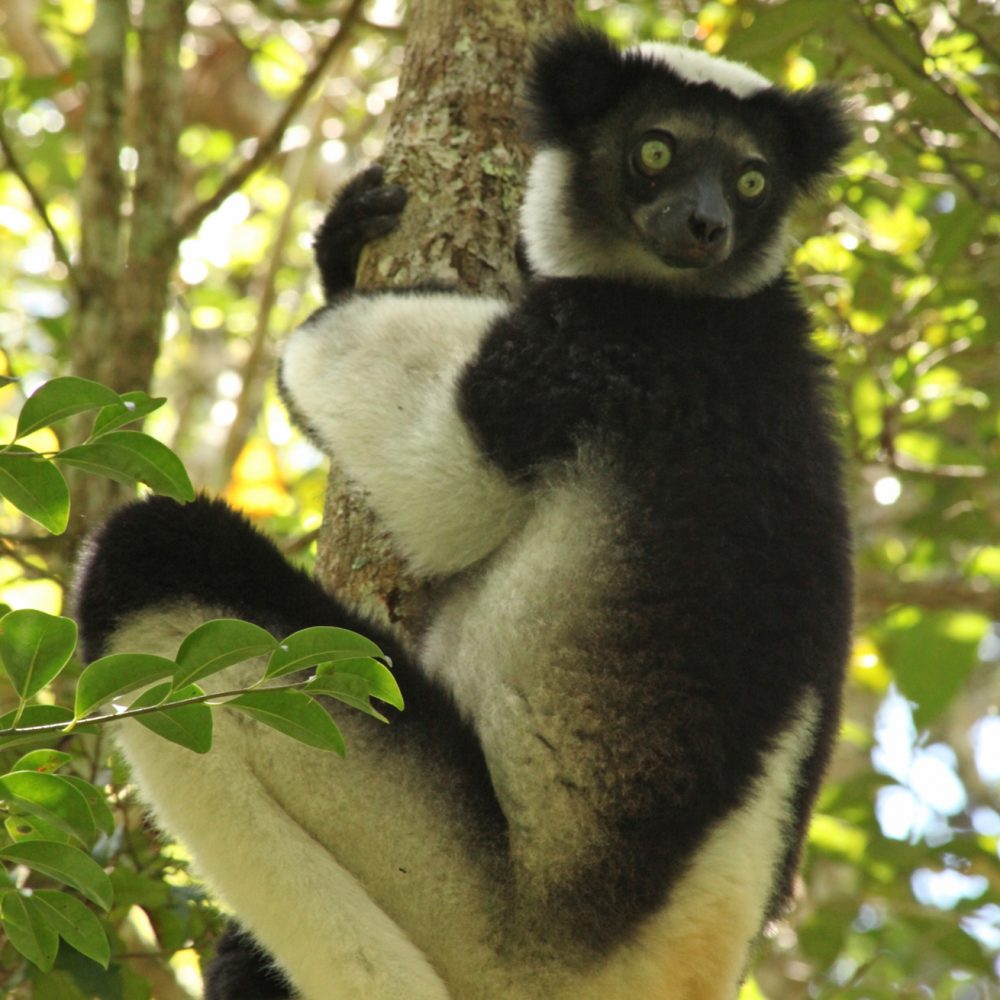 For over 20 years I had wanted to visit Madagascar, the world’s fourth largest island. As one of the planet’s biodiversity hotspots, and home to large numbers of endemic species and one of the strangest forests on Earth, it held a special attraction for me. Over the years I’d learned a lot about the country and its unique complement of wildlife, which includes lemurs, chameleons and hedgehog-like creatures called tenrecs, amongst many others. I also knew about the severity of deforestation and environmental degradation on the island, which has made it one of the world’s top priorities for conservation action, and that in 2003 Madagascar’s president had pledged to protect an additional 5 million hectares of land – an ambitious and much-lauded goal for what is one of the world’s poorest countries.

However, there had always been other priorities for my travels abroad, so it wasn’t until January 2009 that I finally arranged a trip there. With the country being twice the size of the UK, I could only see a small part of it in the two and a half weeks I had available, so I chose 4 areas to visit in the central and southern parts of the island. Two of those were rainforest areas near the east coast, and the others contained tropical deciduous forest and Madagascar’s unique spiny so that I could experience a range of the country’s ecosystems.

As is often the way with travel to foreign lands, and especially poor tropical countries, all my planning began to unravel upon arrival. On the plane to Antananarivo, Madagascar’s capital, I began to experience a ‘furry throat’, and this quickly developed into a full-blown dose of the ’flu. In a feverish state, I didn’t sleep much on my first night in the country, and when I did it was only to experience the disturbing skewed dreams and emotions that fevers bring. I had to cancel my journey planned for the next morning to Andasibe-Mantadia National Park, and I spent my first two days in the country in bed, quite sick with the ’flu.

By the third day, the fever had abated somewhat, and although I was still far from normal, I decided I couldn’t afford to waste any more of my limited time in the country, so I arranged for a car and driver to take me to Andasibe-Mantadia. Arriving there still weak and tired from the ’flu and lack of sleep, I booked into a small hotel immediately adjacent to the National Park, which is one of the best-known protected areas in Madagascar. This is due in part to it being one of the sites where it is possible to see the indri, the largest surviving member of the lemur family – an entirely separate group of primates that are endemic to Madagscar.

As preparation for the trip I had read David Attenborough’s 1961 book, ‘Zoo Quest to Madagascar’, in which he describes searching for over 3 weeks in Andasibe before encountering an indri, so I wasn’t sure of my chances in the 3 days I would be there. However, in the first of numerous magical moments in the island’s forests, within a minute of leaving the hotel’s reception hut and en route to my cabin about 200 metres away, the stillness was broken by an eerie, but beautiful, haunting call that seemed to pierce my heart with the feeling and emotion that it carried. I looked at the man who was showing me to my cabin and asked “Indri?”, which he confirmed with a large grin on his face. Stepping off the path to gain a view through the trees, he pointed at a black and white shape moving in the forest about 30 metres away, and as we looked, the indri came into full view, holding on to a tree trunk.

In my still slightly feverish state, it felt almost as though the indri had called, and then appeared, to welcome me to Andasibe, and indeed to the forests of Madagascar, as this was the moment when I left the human world behind and first stepped into one of the island’s unique ecosystems. I felt deeply touched by this encounter with the wild, and my heart filled with emotion. As with my fever-racked dreams of the previous nights, the intensity of the experience seemed to be amplified by having the ’flu, bringing tears of joy to my eyes.

After a couple of minutes the indri moved out of sight, further into the forest, although I could still hear it, as its call is audible up to 3 km. away. Turning away myself, my eye was caught by a shape on the tree trunk next to me: it was a brilliant green Madagascar day gecko, resting motionless on the bark. Almost iridescent in the intensity of its colouration, it was unperturbed by me looking at it from a distance of less than a metre, and my heart leapt again. I quickly went to the cabin to drop off my luggage, and returned with my camera and tripod to photograph the gecko. While I was doing so, another hotel employee came along, carrying a small branch from a bush, which he held out to me. On it was a beautiful small chameleon, complete with the bizarre bulbous growth on its nose, called a rostral protuberance, which many of Madagascar’s male chameleons are noted for.

By now, it was still less than 15 minutes since I had first set foot in a Madagascan forest and I had already seen members of three of the country’s most charismatic groups of wildlife: lemurs (over 70 species, all of which occur nowhere else), chameleons (Madagascar is home to half of the world’s 150 species) and geckos. Filled with a sense of wonder and deeply touched by the remarkable diversity and beauty of Nature there, this was my first taste of the magic that was to be my ongoing experience on the island.

The next day, I had just stepped out of the park entrance building and into the forest, when my guide (compulsory in Madagascar’s parks) showed me a different species of chameleon catching a grasshopper in spectacular fashion with its long sticky-tipped tongue. I also saw several of Madagascar’s brightly-coloured frog species, the golden sifaka (one of the most beautiful of all lemur species) and the giraffe-necked weevil, a brilliant red insect with an extraordinarily-elongated and jointed neck that has been described as looking like Nature’s version of an anglepoise lamp. Then, after waiting patiently for over an hour under some trees where a group of indris were resting in the canopy, I was filled with emotion again when one of them descended to head height, just a few metres from me.

Each day seemed to bring its new magic moments, and this continued at Ranomafana, the next park I visited. The montane rainforest there is home to two critically-endangered species of bamboo lemurs, and I saw both at close proximity. Remarkably (at least, it seemed to me, being used to the elusive nature of wildlife in rainforests elsewhere in the world), I watched a greater bamboo lemur feeding on bamboo buds from a distance of two metres away.

Leaving the eastern rainforests behind, I travelled south to visit the dry deciduous and spiny forests. This entailed a long journey by road through the country’s highlands, much of which have been deforested. The contrast between the richness of the rainforests and the empty bleakness of the treeless landscape was stark and sobering, as was the poverty of most of the people living there. The depressing feeling this evoked was compounded, literally, by driving into a tropical depression weather system with ominous dark skies and high winds. That developed into Fanele, a category 3 cyclone which hit the west coast of Madagascar with 185 kilometre per hour winds, killing ten people and leaving mayhem in its wake, with thousands made homeless. It also resulted in flooded roads and fallen trees which made travel much more difficult and arduous. The trees that were blown down were mainly non-native eucalypts – the indigenous baobabs, although much larger, have evolved to cope with cyclones and survived unscathed for the most part.

It was the baobabs in particular that I had come to see, in both the deciduous forest area, where the cyclone struck, and the spiny forest further south. Madagascar is home to six of the world’s eight baobab species, and, with their swollen trunks and short stubby branches, they are the most distinctive trees on the island. In the spiny forest, which with its juxtaposition of short, squat baobabs and spine-covered trees has been described as ‘Nature’s botanical lunatic asylum’, I experienced another of those remarkable encounters that Madagascar seemed so full of. One day, I had literally walked only a few metres into the forest before seeing a small snake on the path, in the process of eating a lizard. The lizard was larger in diameter than the snake, but was nonetheless being swallowed because the snake had dislocated its jaw to accommodate it. I watched for 15 minutes, entranced by this spectacle of predation and superb evolutionary adaptation, before the snake slithered away amidst the baobab trunks to digest its meal over the coming days.

A few days later, flying back to the capital, I too was digesting what I had experienced in my time in the country. The flight was over a large area completely stripped of its trees, and the bare earth and rivers coloured red by the eroded soil they were carrying were an indication of the literal bleeding of the earth that has occurred in much of Madagascar. This human-created ecological mayhem far outweighs the destructiveness of a cyclone, and threatens the survival of much of the island’s biological diversity and the wellbeing of its human population.

I arrived back in Antananarivo to find that large-scale protests against the government were underway, with over 100 people killed on the streets. The city was like a ghost town, with all shops and restaurants closed, and a few weeks later, the President was overthrown. Eco-tourism, a mainstay of the country’s economy and a source of funds for the country’s parks, collapsed virtually overnight as people cancelled their trips because of the political instability. As I write this, some months later, the political situation is still unresolved, and illegal logging and poaching are now taking place inside national parks. It’s a microcosm of today’s global situation, because in spite of the recent successes in conservation, Madagascar’s unique and magical biodiversity is at renewed risk from the mayhem created by 21st century human culture.

Return to the Writing page.